Could this be the end of UK serps

I’m not alone in moaning about the uk serps

Take a look at a few of these postsÂ http://www.seroundtable.com/archives/020175.html andÂ http://www.ppcblog.co.uk/google/big-geo-problems-still-exist-in-google-uk-serps plus many others..

WARNING THIS IS NOT GOOD IF YOU FROM THE UK

So the serps are bad already.. yes we agree on the … but google are testing a new UI in chrome only “so far”..

Here is a screen shot from firefox which seems not to be affected: 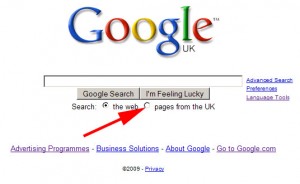 Ok you might not think it “to bad” but one major thing is the serps..

The screen shot below shows theÂ “Show only results for United Kingdom” link at the bottom of a google.co.uk serp! 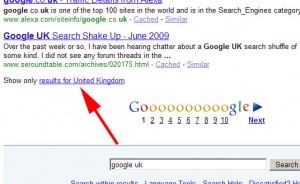 I really hope this doesn’t Â stick as its seems to assume you looking for a no UK result well above a uk result and with the way the serps are already this isn’t going to help us in the UK!! 🙁