Google hates Wales (not the mammals)

Ok haven’t blogged for an age here… So now that I have a tiny amount of time I thought I’d blog a little now and again..Â

So today I thought I’d raise my PPC budget after dropping for the time i’m away.. “as per norm” ..Â

Me been being bored this am I have a looky at google “Campaign Optimiser” Which states :

Your campaign’s recent performance shows that some targeted locations perform better for you than others. We recommend that you focus on those regions that have higher Click-through rates than your current average.

The Sad/funny thing is I target the UK only with this campaign thus select uk.. Simple yes ?Â

Well. Google thinks Wales is just no good for me.. Â Google suggest removing wales from my geo-targetting which would increase my CTR..Â

wired thing is it will increase CTR and result in less imp’s and clicks.. Odd..Â

Here is the map of the proposed locations:Â 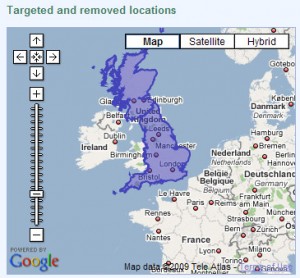 This is why removing wales is better :

Google+
View all posts by gabs →
This entry was posted in google, Google Adwords, UK and tagged adwords, google, wales. Bookmark the permalink.