I run a large forum and had a “Defamation Complaint: UK” as a member had posted about how they felt they had been scammed.

I’m not going to quote as don’t want to url removed for the search results but here is the gist..

Said member had paid for an ad in a publication which was sold with a mediapack explaining the circulation which seemed off the scale for the location of this publication.. For the member it was to late when he/she had worked it out and tried to stop the ad and not pay.. The publication sent threats for late payment..

The member then wanted to warm other members of my forum and did so by posting a thread.. The thread got a lot of traction as other members including me had been approached by this hard selling publication. All members who’d turned down the offer did for the same reason as me, I couldn’t see who would read this mag and at the prices it was just crazy!

On chillingeffects I’m 1 on 100’s of sites outing said publication.

Anyway.. To the point…

Yes google removed the content from google.co.uk which is fine and I’m not going to fight it..

I constantly get emails from google webmaster tools warming me about the removal of 1 URL..

The URL is non public now and I’ve even used the URL removal to manually remove the url BUT I still get emails. If it was monthly reports etc that would be fine but its not..

Here is the screen shot from webmaster tools: 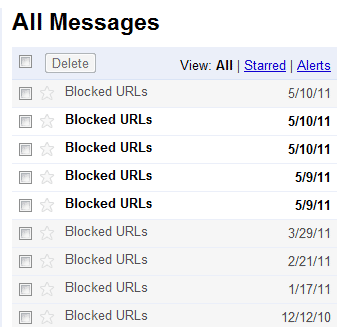 As you can see the dates are a little crazy for 1 url being block..

Here is the gmail screen shot for the emails I get:

As you can see if you know gmail the “show quoted text” as this email is a duplication .. All 4 email are identical.

I’ve read in forum that this is common.

I hope google will fix it..

Google+
View all posts by gabs →
This entry was posted in google, google sitemaps / webmaster tools. Bookmark the permalink.