I used to go to night clubs loads when I was younger and was up for “maybe” going this weekend..

My GF did the ibiza thing and love to dance…

So.. WentÂ to look a club I went to a few time and really enjoyed called “The Cross” just outside Kings cross in central london..

Finally I thought i’d add london.. “the cross nightclub london” which returned google local at the top with the address of the club “BUT” the url was a club the other side of town!

So along came another super club pacha and took the local results for themselves along with some SEO target the natural results too..Â

Wonder how long it will last ?

So if you know a competitor is closing down and you want the traffic then why not blag top spot via local search..

Here is a screen shot: 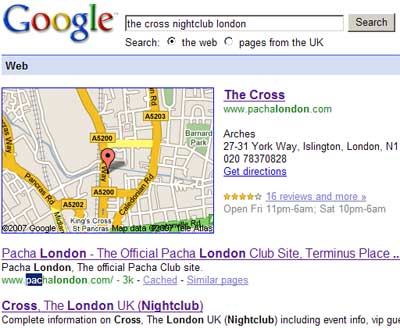 Google+
View all posts by gabs →
This entry was posted in google, google maps and tagged local search, The cross night club london. Bookmark the permalink.